High voltage automatic cable / harness / box testers series TEST-9110 are serially produced by Informtest since 2006. As of the beginning of 2017, more than 250 sets of TEST-9110 series systems are in operation. Two types of software have been supplied with them so far: software "AKM" and software "Translator of cyclograms". Consumers expressed their desire to unite these software packages into a single complex. Now these programs are renewed in the AFC-9110 software.

The AFC-9110 software is the most important part of the cable testers series TEST-9110, also because it is the same for all versions of the system.

The AFC-9110 software was developed for use by common user, and does not require special programming skills for writing user test programs for the UUT (cables, relay boxes, panels, switchgears, etc.)..

In AFC-9110, it is possible to select from the set of typical steps the sequence of execution (cyclogram) required by the user. In this case, each of the steps has a window interface, which allows you to set all the parameters of the step in the most simple and understandable way. Types of steps include all settings and checks that exist in AKM software, as well as a number of additional features and algorithms. It is possible to generate message dialogs to the operator during the execution (for example, about connections to the UUT), change both the description of the connection to the UUT, and the description of the circuits, change the meter settings, etc..

To check the specific values and ranges of both resistances and voltages, there is a step type "Text program" in which you can perform measurements and checks using the simple syntax. The focus here was on ease of use. For additional tools, there are different types of steps.

For example, for command generators or dry contact, it is possible both to generate or recieve commands, and to generate pulses or generate pulse sequences, and for measuring voltages of the instruments type MN8I or MN8S, perform continuous measurement and control of values. Also in the AFC-9110 there were several improvements and new algorithms for checking the installation: for example, in the integrity check, you can choose how to test the further points of the circuit - relative to the reference circuit or broken circuit, and when checking the insulation resistance, you can set a preliminary check with reduced voltage.

An interesting new algorithm of the step "Test Chains Topolgy", performs an automatic check of the following type: first, the integrity of the circuits is checked, and if broken into which segments the circuit is broken, then the shorts between all circuits and broken circuit segments are checked with detailed diagnostics information output.

The AFC-9110 has the function of an active probe, a special mode for monitoring cables or other UUT under vibration, a mode for auto-detecting a list of connections over a reference cable, and much more.

A unique mode of checking the integrity of circuits under mechanical impact on the UUT: vibration, jolting, bending, etc. allows to search for hidden defects in the standard version of the TEST-9110 testers both when testing the objects during the acceptance and directly at the facility, when the electrical installation and the assembly of the object are already completed, and the on-board cable network of the object has a floating defect which is very laborious to detect by traditional methods.

All test descriptions created in the AFC-9110 software are stored in a single file, including descriptions of circuits and connections. To check the integrity of the files, the CRC32 checksum is used, which is also immediately visible to the operator (helps to keep records of files). The test program file can be saved with a password, after that only execution is possible, and all corrections are closed. To verify the correctness of all descriptions, there is an editing mode (simulation) in which the user can work out the program without having a set of TEST-9110 equipment. This feature allows users and programmers involved in the preparation of test programs, create and edit programs without occupying the workplace and the operating time of the equipment.

Useful feature of the Informtest software is that any user programs written for absolutely any version of the software of the TEST-9110 series systems work fine on newer versions of the system. Moreover, consumers who have already bought the system on a regular basis are offered a free software upgrade to the newest versions. The AFC-9110 software interface is constantly being improved, but it does not change in general. This allows customers previously familiar with AKM software and AFC-9110, immediately start working with new versions

In general AFC-9110 considerably expands and improves functionality of automatic cable test systems series TEST-9110 and speeds up production preparation at factories or at other sites. 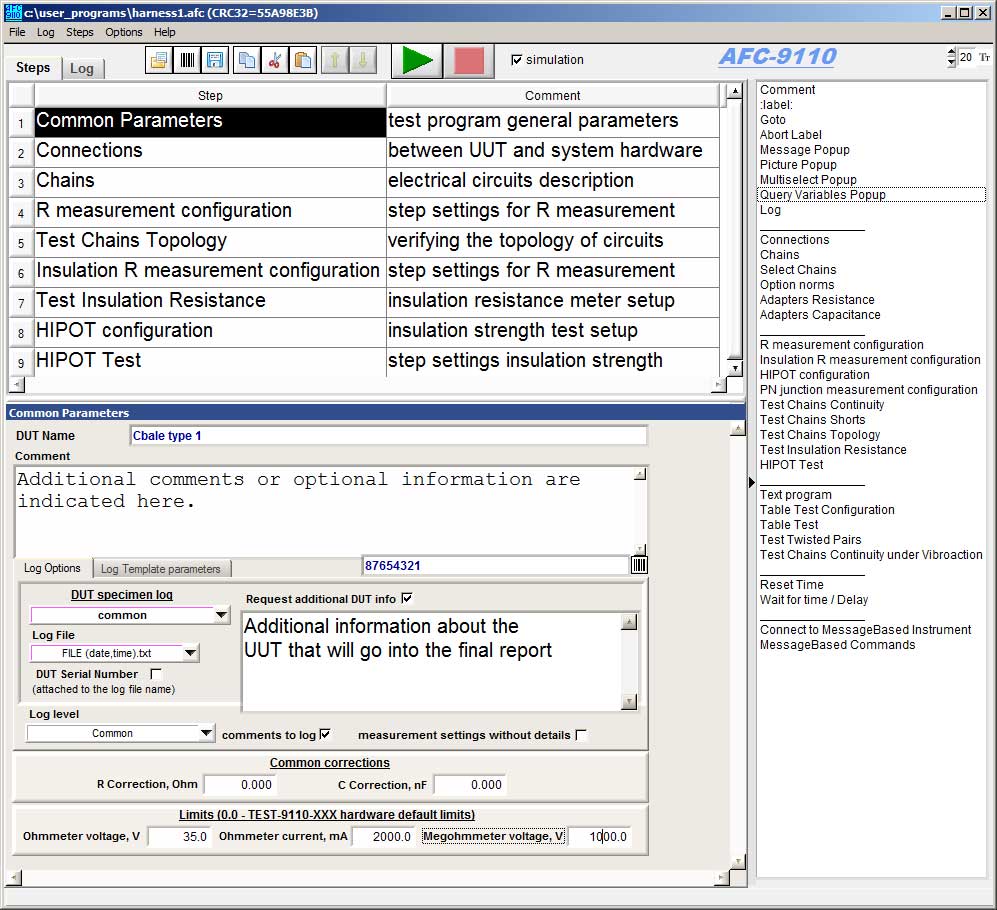